The Real Housewife of Kentucky: Doing Nothing

Sometimes, without much warning, there comes a pause in the action. At first, when it came I was suspicious. It was heavy and empty and silent. I took myself for a walk. Then, when I came home I tried to create things. But I couldn't. Instead, I cleaned my closet.

A few days later, I had cleaned more things. And scrubbed the floors. And the bathroom. And organized. I kept saying, "Clutter-Free 2012!" I put things in baskets and recycled boxes.

Also, I started to cook more and more new things. One of my many (spoiled) Christmas presents was a pressure cooker. So, I made Coq Au Vin and all sorts of new inspired dishes. I baked. There were things in the crockpot, things in the kitchen aid, things in the slow cooker. 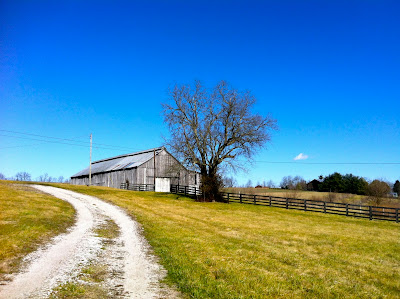 I started a new project, it's currently called, "The Woods." I like it. It moves a long and has a nice rhythm to it. And magic things happen. It's mostly about the woods.

I wrote a new poem. It's about lightning and love.

*
I wrote my friend to say, "I haven't been working on the novel. It's in forced purgatory. I'm waiting. I'm waiting for more comments and then I will dig in and make some significant changes. In the meantime, I cook, and workout, and clean." She called me, "The Real Housewife of Kentucky."

I twittered that I had done nothing all day. Though in truth I had hiked, and cleaned, and read many many poems, and made a good dinner. And a stranger twittered back this:

It takes a lot of time being a genius, you have to sit around so much, doing nothing.


I'm not a genius. But I'm a genius at doing nothing.

*
After, I finished reading Poetry magazine, I made a sign out of the subscription card, we call them "blow-ins" in the biz, and put it on my desk. Next to a jar of beach glass with a bird on top. 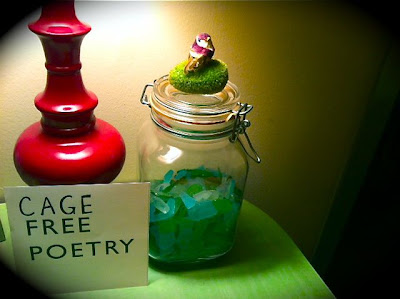 I took some time to write to my friends. Good long letters when they were needed. To one, I wrote something like this, "I still get the blues a lot. But I have a lot more tools to deal with it now. I've read a lot of books about self-improvement. You can sum them all up in one word: BREATHE (or CHILL)." (That's true.)

We made a beer with our friends. I want to name it something awesome.

It's been cold recently. And gray. But not too bad. And not too gray. (I just learned how to spell GRAY. I say, "With an 'A' for AMERICA.) 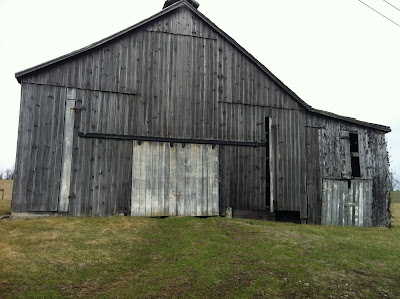 One of those books I was talking about earlier says that we have to be careful about roles. How sometimes you get caught up in being something you're supposed to be: mother, leader, artist. And I was in the bathtub (that was very clean) and I realized that I was working on trying to BE a writer and an artist, when, really sometimes, I just need some time to breathe. You probably do, too.

The dog is snoring. I should go clean something. And make a healthy turkey meatloaf. And watch a movie. And do nothing.

Friday the 13th with 3rd Graders! 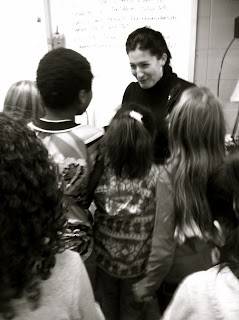 Today, I spoke to a group of 78 third graders at Maxwell Elementary School in Lexington, KY. I was a bit nervous as it has been years since I've been in front of a classroom. Not since the days of working with the wonderful Community Word Project and teaching in the Bronx, had I spent so much time with an audience of young ones. And we had a blast. My dear friend who invited me wanted me to read some of my own work, but because much of my work is geared towards adults, I decided to write a poem specifically for these students. It's a children's poem exploring what it's like to become a poet. It's been a long time since I wrote anything for children, but I found great joy in the process. Here it is below. Thank you to the 3rd Graders of Maxwell and their wonderful teachers for an inspirational day of words and warm place to escape the snow.


The Invitation
For Maxwell 3rd Graders

When I was a big-mouthed kid
with so much of my life left to go,
there were so many things I wanted
to feel, to see, to know.

I wondered about the birds I saw
crisscrossing the endless sky.
I wondered how it would feel someday
to open my feather-less self and fly.

I thought about the bully bee
with its painful, throbbing sting.
I wondered if I could ever make
such a small and powerful thing.

I thought about the darkness
and the giant moon in the trees,
how sweet that light would feel
glistening on my own leaves.

I wanted to be incredible,
create rhythm (and sometimes rhymes).
I wondered what my dreams
would look like, broken into lines.

What I wanted was to say something,
but I didn’t know where to start,
so I walked out in to an empty field
and tried to quiet my too-loud heart.

And when I listened long enough,
there came a rumbling of distant words.
They were coming out of nowhere,
like a booming flock of wayward birds.

Oh how I was thunderstruck!
Oh how I welcomed the unknown!
I knew then, that all I wanted
was to make my life a poem.

After the rush and buzz of the holidays (an eleven day road trip with puppy in tow), I came back to Kentucky with a new sense of my weird self. Not the sense of self that says, “I’ve got this figured out,” but rather the one that says, “Oh, right, I have no idea what I’m doing.” I learned a lot about how I want to live my life, what I want out of it, who I want to spend it with, what my next journeys will entail, and so forth. In the fall of 2010, I quit my job, and despite having fallen in love with someone, moved home to the Valley of the Moon where I tried desperately to write a novel. Now, it’s 2012. I live in Kentucky with my man. I have finished the fifth draft of my first of a novel. We have a dog, and we go for walks, and write, and drink bourbon, and wine, and tea. I freelance copywrite from my home office, which keeps me in touch with New York and the advertising world, and all in all, I am, (say it, or as Elizabeth Bishop said…(Write it!), happy.

And yet still there are days when I am not. When I am full of fear and self-loathing. Full of envy, greed, or hurt. The days where the beast inside of you rails against your softer water-sack on the soul and screams that you are doing it all wrong, making a mess of things, carpooling one too many bad ideas to and from the office of regrets. It’s fascinating to me.  Still, as I enter 2012 with a still-not-done-probably-80% there-book-I-never-thought-I-would-write, and a life I never thought I would have, despite my occasional blues and mean streaks, I am pressing onward with some absurd belief that everything’s going to be alright. In the meantime, these are my resolutions that I will make here to keep me sane and grounded. (Some of these, I already do, and this simply serves as a way of recommitting to them.)